ACN, LLC is a North-American based multi-level marketing company which provides telecommunications, energy, merchant services and other services, depending on the country, through a network of independent sales agents known as "Independent Business Owners", who themselves can recruit new people as sales agents. IBOs earn residual income and bonuses through the acquisition of personal customers, as well as customers by other IBOs they recruit. Based in Concord, North Carolina, United States, ACN began operations in the United States in 1993 as an American Communications Network. It extended operations to Europe in 1999, to the Pacific in 2006, to Asia in 2011, and now operates in 25 countries, on four continents. As a reflection of its international operations, it changed its name to just the initial letters ACN. The company is a member of the Direct Selling Associations in North America and Europe.

AT&T Inc. is an American multinational telecommunications conglomerate, headquartered at Whitacre Tower in downtown Dallas, Texas. AT&T is the second largest provider of mobile telephone services and the largest provider of fixed telephone services in the United States, and also provides broadband subscription television services through DirecTV. AT&T is the third-largest company in Texas. As of May 2014, AT&T is the 23rd-largest company in the world as measured by a composite of revenues, profits, assets and market value, and the 16th-largest non-oil company. AT&T is the largest telecommunications company in the world by revenue. As of 2016, it is also the 17th-largest mobile telecom operator in the world, with 130.4 million mobile customers. AT&T was ranked at #6 on the 2015 rankings of the world's most valuable brands published by Millward Brown Optimor.

AT&T Mobility LLC, formerly known as Cingular Wireless and marketed as simply AT&T, is a wholly owned subsidiary of AT&T that provides wireless services to 133.3 million subscribers in the United States including Puerto Rico and the U.S. Virgin Islands. AT&T Mobility is the second largest wireless telecommunications provider in the United States and Puerto Rico behind Verizon Wireless. AT&T Mobility is headquartered in the Lenox Park area of Brookhaven, Georgia, just outside Atlanta.

CenturyLink, Inc. is an American worldwide communications company headquartered in Monroe, Louisiana. It provides communications and data services to residential, business, governmental and wholesale customers in 37 states. A member of the S&P 500 index, the company operates as a local exchange carrier and Internet service provider in U.S. markets and is the third-largest telecommunications company in the United States in terms of lines served, behind AT&T and Verizon. It also provides long distance service.

Charter Communications is an American cable telecommunications company, which offers its services to consumers and businesses under the branding of Charter Spectrum. Providing services to over 25 million customers in 41 states, it is the second-largest cable operator in the United States by subscribers, just behind Comcast. It is the tenth largest telephone provider based upon residential subscriber line count. In late 2012, with the naming of longtime Cablevision executive Thomas Rutledge as their CEO, the company relocated their corporate headquarters from St. Louis, Missouri to Stamford, Connecticut, although many operations still remain based out of St. Louis.

Comcast Corporation, formerly registered as Comcast Holdings, is an American global mass media conglomerate and is the largest broadcasting and cable television company in the world by revenue. It is the second-largest pay-TV company after the AT&T-DirecTV acquisition, largest cable TV company and largest home Internet service provider in the United States, and the nation's third-largest home telephone service provider. Comcast services U.S. residential and commercial customers in 40 states and the District of Columbia. The company's headquarters are located in Philadelphia, Pennsylvania. As the owner of the international media company NBCUniversal since 2011, Comcast is a producer of feature films and television programs intended for theatrical exhibition and over-the-air and cable television broadcast.

Hotmail was acquired by Microsoft in 1997 for an estimated $400 million and launched as MSN Hotmail, later rebranded to Windows Live Hotmail as part of the Windows Live suite of products. Microsoft released the final version of Hotmail in October 2011, available in 36 languages. It was replaced by Outlook.com in 2013.

Outlook.com is a web-based suite of webmail, contacts, tasks, and calendaring services from Microsoft. One of the world's first webmail services, it was founded in 1996 as Hotmail (stylized as HoTMaiL) by Sabeer Bhatia and Jack Smith in Mountain View, California, and headquartered in Sunnyvale.

Samsung Electronics Co., Ltd. is a South Korean multinational electronics company headquartered in Suwon, South Korea. Through extremely complicated ownership structure with some circular ownership it is the flagship division of the Samsung Group, accounting for 70% of the group's revenue in 2012. It is the world's second largest information technology company by revenue, after Apple. Samsung Electronics has assembly plants and sales networks in 80 countries and employs around 370,000 people. Since 2012, Kwon Oh-hyun has served as the company's CEO. 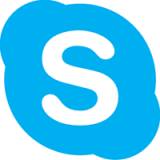 Skype is an application that provides video chat and voice call services. Users may exchange such digital documents as images, text, video and any others, and may transmit both text and video messages. Skype allows the creation of video conference calls. Skype is available for Microsoft Windows, Macintosh, or Linux, as well as Android, Blackberry, Apple and Windows smartphones and tablets.

Spectrum Internet is a US Internet service provider (ISP) which provides cable Internet service over DOCSIS-compatible modems. A division of Charter Communications (which acquired Time Warner Cable in May 2016), it also contracts its service to other cable providers, often in competition with ISPs owned by local telephone companies. This service was formerly known as Time Warner Cable Internet and, before that, Road Runner High Speed Online.

Sprint Corporation, commonly referred to as Sprint, is an American telecommunications holding company that provides wireless services and is a major global Internet carrier. It is the fourth largest mobile network operator in the United States, and serves 60.2 million customers as of October 2016. The company also offers wireless voice, messaging, and broadband services through its various subsidiaries under the Boost Mobile, Virgin Mobile, and Assurance Wireless brands, and wholesale access to its wireless networks to mobile virtual network operators. The company is headquartered in Overland Park, Kansas. In July 2013, a majority of the company was purchased by Japanese telecommunications company SoftBank Group Corp., although the remaining shares of the company continue to trade on the New York Stock Exchange.

T-Mobile US, Inc. is a major wireless network operator in the United States. The German telecommunications company Deutsche Telekom is its majority shareholder, through DT's holding company T-Mobile International AG. Its headquarters are located in Bellevue, Washington, in the Seattle metropolitan area. T-Mobile is the third largest wireless carrier in the United States with 69.4 million customers as of Q3 2016.

Time Warner Inc. is an American multinational media and entertainment conglomerate headquartered in New York City. It is currently the world's third largest entertainment company in terms of revenue, after Comcast and The Walt Disney Company. It was also once the world's largest media conglomerate. Time Warner was first founded in 1990 with the merger of Time Inc. and Warner Communications. The current company consists largely of the assets of the former Warner Communications (as well as HBO, a Time Inc. subsidiary prior to the merger), and the assets of Turner Broadcasting (which was acquired by the company in 1996). Time Warner currently has major operations in film and television, with a limited amount in publishing operations. Among its most popular assets are HBO, Turner Broadcasting System, The CW Television Network, Warner Bros., CNN, DC Comics, and as of August 2016, Hulu, owning 10%. In the past, other major divisions of Time Warner included Time Inc., AOL, Time Warner Cable, Warner Books and Warner Music Group. All of these operations were either sold to other investors or spun off as independent companies from 2004 to 2014.

Time Warner Cable (TWC) was an American cable television company. Prior to its purchase by Charter Communications in 2016, it was ranked the second largest cable company in the United States by revenue behind only Comcast, operating in 29 states. Its corporate headquarters were located in the Time Warner Center in Midtown Manhattan, New York City, with other corporate offices in Stamford, Connecticut; Charlotte, North Carolina; and Herndon, Virginia.

It was controlled by Warner Communications, then by Time Warner (the film and television production company and cable channel operator). That company spun off the cable operations in March 2009 as part of a larger restructuring. From 2009 to 2016, Time Warner Cable was an entirely independent company, continuing to use the Time Warner name under license from its former parent (including the "Road Runner" name for its Internet service, now Spectrum Internet).

United States Cellular Corporation, doing business as U.S. Cellular, is a regional carrier which owns and operates the fifth-largest wireless telecommunications network in the United States, serving 4.9 million customers in 426 markets in 23 U.S. states as of the first quarter of 2016. The company has its headquarters in Chicago, Illinois.

Verizon Communications, Inc. , is a broadband telecommunications company and the largest U.S. wireless communications service provider as of September 2014, and a corporate component of the Dow Jones Industrial Average. The company is based at 1095 Avenue of the Americas in Midtown Manhattan, New York City, but is incorporated in Delaware.