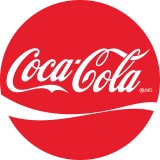 Coca-Cola, or Coke, is a carbonated soft drink produced by The Coca-Cola Company. Originally intended as a patent medicine, it was invented in the late 19th century by John Pemberton and was bought out by businessman Asa Griggs Candler, whose marketing tactics led Coca-Cola to its dominance of the world soft-drink market throughout the 20th century.

Pepsi is a carbonated soft drink produced and manufactured by PepsiCo. Originally created and developed in 1893 by Caleb Bradham and introduced as Brad's Drink, it was renamed as Pepsi-Cola on August 28, 1898, and then as Pepsi in 1961.

PepsiCo, Inc. is an American multinational food, snack, and beverage corporation headquartered in Purchase, New York. PepsiCo has interests in the manufacturing, marketing, and distribution of grain-based snack foods, beverages, and other products. PepsiCo was formed in 1965 with the merger of the Pepsi-Cola Company and Frito-Lay, Inc.